The paradise province of Bali is Indonesia’s best known and most visited island, drawing travellers from all around the globe. Every year, thousands of people flock to Bali’s sandy shores to revel in its breathtaking scenery, unique culture, and delicious food.

Bali is also home to most of Indonesia’s Hindu minority and boasts a vibrant art scene and rich cultural heritage. Known as The Island of the Gods, Bali is home to thousands of Hindu temples, which are scattered all over the small island. Lush greenery, volcanic landscapes, and rich marine biodiversity truly make Bali feel like heaven on earth.

The variety of Bali is what sets it above and beyond other popular travel destinations. Each region offers a new set of activities, a different crowd of people, and its own unique atmosphere.

Whether you’re a yogi, surfer, partygoer, explorer, solo traveller or family unit, finding your scene in Bali is easy. With something to suit every type of traveller, it is easy to see why Bali tops the list of the world’s most popular tourist destinations.

People have been living in Bali since prehistoric times, with early settlers thought to be Austronesian in origin. The migration of people from throughout Asia brought diverse cultural influences to the island, with people arriving from South China, Malaysia, the Philippines, and Oceania. Balinese culture has been strongly influenced by Indian Hinduism in particular, thought to date back to the 1st century.

The island has been ruled by several dynasties throughout history, the earliest evidence of which is the Belanjoing Pillar inscription. This pillar can be found near Sanur beach and dates back to the early 10th century. The writer of this ancient artifact was Sri Kesara, a Buddhist King of the Sailendra Dynasty. Sri Kesara is believed to be the founder of the Warmadewa Dynasty in Bali, the earliest known ruler of the island.

The Warmadewa dynasty persisted until the 12th century and was followed by the Majapahit dynasty. This ruled until the second half of the 17th century and brought a strong Javanese influence to the island. Javanese culture was adopted widely throughout Bali during this period and is evident in much of the architecture, art of dance, theatre, sculpture, and paintings of the island.

Following the breakup of the Majapahit rule, Bali was split into nine minor kingdoms; Klungkung, Buleleng, Karangasem, Mengwi, Badung, Tabanan, Gianyar, Bangli, and Jembrana. These kingdoms warred among themselves until the 19th century, when the Dutch arrived and began their occupation of Bali. The Dutch East Indies army invaded Bali in 1846, and finally gained control of the island in 1849. After a one hundred year rule, Indonesia became independent of the Netherlands in 1949, and the province of Bali was established in 1958.

When was Bali discovered?

Europe is thought to have first made contact with Bali way back in 1512 when a fleet of Portuguese ships landed on its north coast. The Dutch explorer Cornelius de Houtman later landed on the island in 1597, and a second Dutch expedition was made to Bali in 1601.

The first Europeans to land in Bali were believed to be Portuguese and were led by Antonio Abreu and Francisco Serrão. Bali was first mapped in this same year by Francisco Rodrigues, who was aboard this same expedition.

Although Islam is the predominant religion throughout most of Indonesia, the vast majority of Balinese people are Hindu. Balinese Hinduism is followed by more than 80% of the island’s population, whilst Muslims account for only 13.4%.

Bali’s brand of Hinduism is unique to the island and differs greatly from that found in other countries. Hinduism is thought to have arrived in Indonesia from India as early on as the first century and has since been combined with traditional animistic beliefs and practices. Colourful festivals and celebrations are held on the island throughout the year, and visitors can expect to see vibrant ceremonial dresses, dances, and displays. For example, some of the most famous festivals are the Nyepi Eve and Galungan & Kuningan.

Once home to the Bali tiger, leopards and the wild benteng, Bali’s temperate climate is home to many fantastic beasts. Although big cats have been absent from the island since the early 20th century, nature-lovers can still expect to encounter some very cool wildlife.

The island’s terrain is diverse, featuring volcanoes, jungles, reefs, coral beds, and rivers. Whether hiking, trekking, or swimming, visitors to Bali can expect to spot a wide range of Asian flora and fauna.

There are approximately 280 species of birds living on the island of Bali. Be on the lookout for sea eagles, long-tailed shrikes, kingfishers, and dollarbirds as you explore jungles and coastal areas.

If you’re really lucky, you may even spot the critically endangered Bali Myna, fewer than 100 of which are thought to be left in the wild.

Scuba diving and snorkeling are popular pastimes around Bali, and with such an impressive array of spectacular sea life, it’s easy to see why. The rich coral reefs of Amed, Nusa Penida, and Tulamben in particular host some unmissable species, such as the Hawksbill Turtle, Giant Manta Ray, and the Giant Moray Eel. Head a little further out and you may even see dolphins or if you’re especially daring, Hammerhead sharks.

If you prefer to keep your feet on dry land, not to worry! Bali has a wide range of interesting mammal species that can be spotted all over the island. Most notably are the monkeys, of which Bali has two species; the crab-eating Macaque, and the far rarer Javan langur. Travellers can even get up close and personal with these furry pals at Ubud’s Monkey Forest, where monkeys are used to being fed and handled by visitors.

Other notable mammal species on Bali include the Asian Palm Civet (famous producers of the cat-poo coffee) and, more rarely, the leopard cat.

Bugs can be gross or fascinating, depending on how you look at it. One thing’s for sure, though – Bali has a plethora of native insect species, including a variety of spiders, mantids, butterflies, centipedes, and beetles.

This may sound a little daunting to the bug-phobic, but the main consideration to make when visiting Bali is the ubiquitous mosquito. These are particularly common around the rainy season and can carry such diseases, as malaria. Invest in an effective repellent before you arrive, to avoid those itchy bites!

Bali’s jungles are known to house some serious snakes, including the King Cobra and the Reticulated Python. The island is also home to the Water Monitor, a fast-moving lizard that can grow up to a monstrous 1.5 meters in length.

If reptiles turn you cold, don’t panic – these critters are shy, and rarely encountered by people.

Landscape, scenery, and beaches in Bali

Bali’s beaches are well known for their white sand and turquoise waves, but the island has much to offer beyond a beautiful coastline. The island’s scenery and landscapes are wonderfully diverse, with lush jungle, rolling rice paddies,  and raw volcanic terrain.

There are many ways to explore the breathtaking scenery of Bali. Strap on your hiking boots and walk to one of the island’s stunning waterfalls, take an early morning trek up the mountain, or rent a motorbike to explore some of the island’s lesser-known beauty spots.

Bali is part of the Coral Triangle, the area with the greatest marine biodiversity in the world. These vibrant coral beds hold a plethora of marine life, making it well worth your while to explore the island by land AND sea. Scuba or snorkel to view these exquisite underwater habitats, particularly around the islands of Nusa Penida and Nusa Lembongan.

Plastic pollution is a rapidly growing problem in the sea around Bali, with much of the refuse produced by Indonesia itself. The booming tourism industry has put further pressure on the situation, and large amounts of plastic waste in the oceans are putting Bali’s marine life under threat.

Public awareness of this issue is steadily growing, and many locations around Bali now hold volunteer beach clean-up expeditions.

To do your part, remember to enjoy wildlife responsibly and do not disturb or pollute the natural habitats of the island. Or better yet, get involved, and help to make Bali more environmentally sustainable! 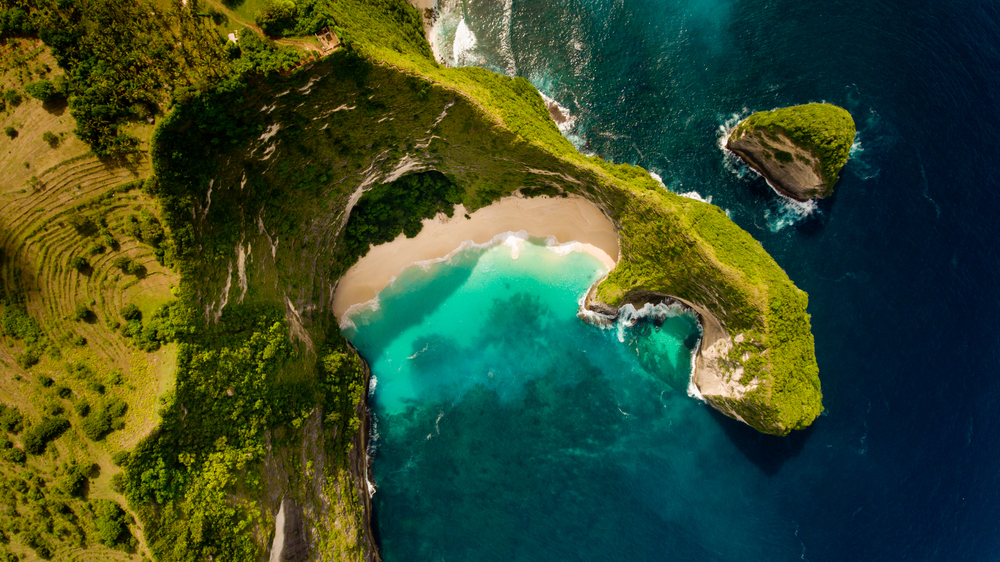 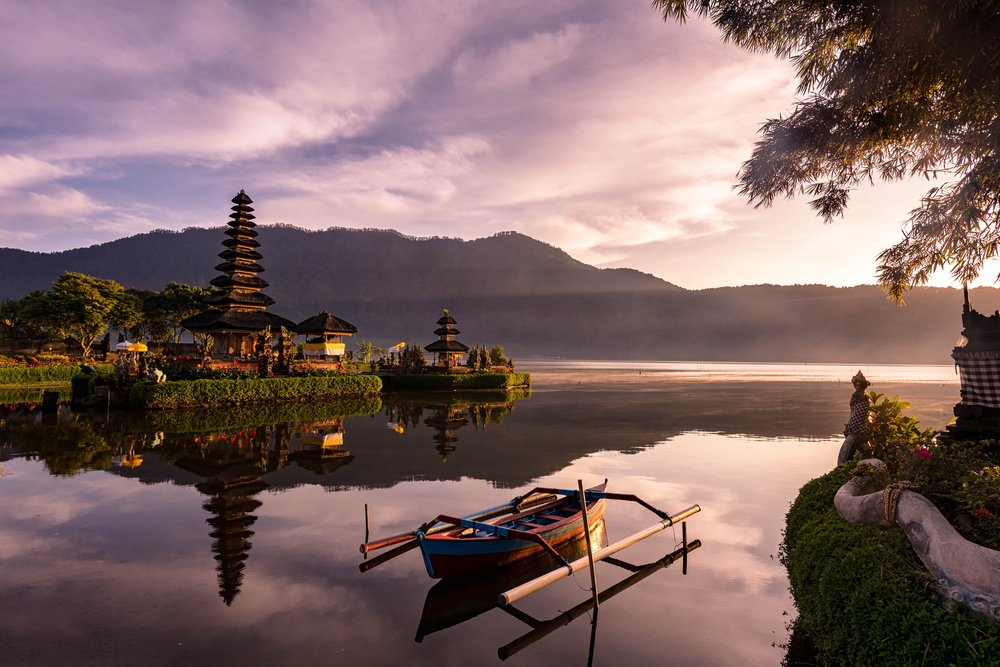